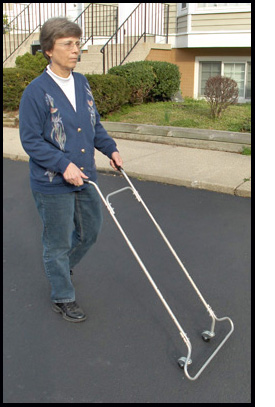 "Alternative mobility devices" (AMD's) can provide as much protection (or more!) as a long cane, but without having to use proper cane technique. They can reliably detect obstacles, slopes or drop-offs (such as curbs or stairs) ahead of the user.

AMDs are often used by people (children and adults) who cannot use the long cane because they are physically not able to move the cane properly or unable to learn to use it reliably, or because using the cane is painful.

AMDs are also useful for people who require advanced warning of cross-slopes in the sidewalk.

And AMDs are sometimes used for jogging, as they don't require coordination of the cane with the feet.

However, it is important to note that traditionally designed AMDs do NOT provide support! They only provide information about what is on the ground ahead.

The photo to the left shows an AMD that was developed for research purposes by the Veterans Administration. It is not available for sale, but I use it as a prototype to determine if an AMD will be useful for clients and if so, what length is needed.

Before I had this prototype, I used wheeled luggage carriers and portable shopping carts like those shown to the right to demonstrate to clients how an AMD might work for them. Actually, such carts and carriers have been used by some people as an AMD (if you use such a ready-made device as an AMD, be sure the wheels are far enough apart -- see below). 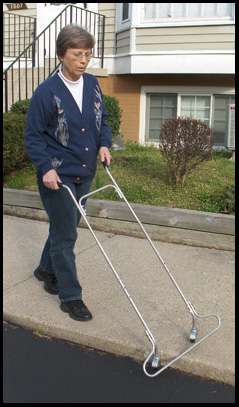 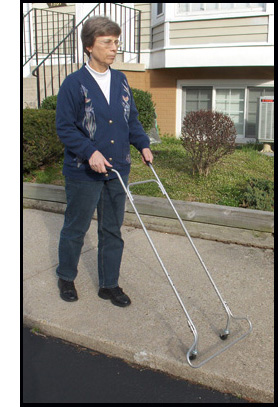 AMD's can detect drop-offs, as shown in the photos to the right. To be able to detect drop-offs at the side they must have two wheels or rollers, separated from each other. 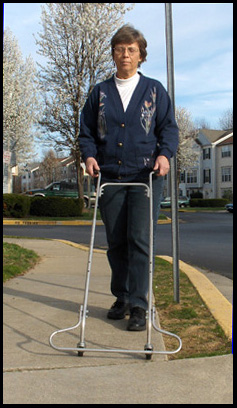 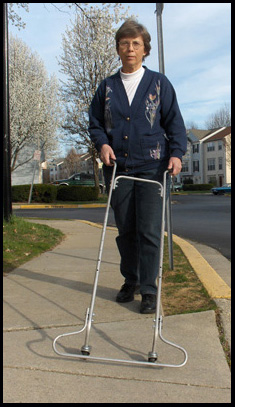 AMDs are much more effective than canes to detect and anticipate changes in slopes, as illustrated in the photos to the left. I've had several clients who could lose their footing if they encountered a cross slope that they didn't anticipate, and they were unable to get that information with a cane. The AMD was the perfect tool for them.

One of these clients was a woman who walked well on level ground, but needed some support to step up or down even the shortest curb or raised crack in the sidewalk, and would fall if she stepped on a cross-slope expectedly. When she tried the AMD, the change in her gait was miraculous. After just a few minutes of practice to realize she could detect those slopes in time to stop and avoid or deal with them without falling, she felt confident and walked fast with a big smile on her face.

The front of the AMD should be far enough ahead of the user to allow sufficient warning of drop-offs, depending on the person's reaction time and speed of walking (or running!).

To determine how long the AMD should be to provide this warning, I usually find something like the edge of a carpet or where the sidewalk meets the grass -- something that they can easily feel when the AMD goes over it, and yet it won't snag the AMD and it won't trip or injure them if they walk over it. 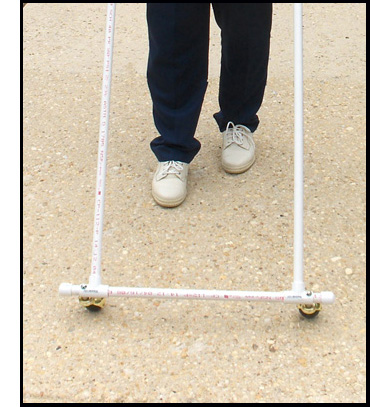 Then I tell the students to use their normal speed to walk toward the edge (or run, if they want to use this as a mobility device for running), and stop as soon as they detect the edge. If they can't stop until their feet go over the edge, we make the AMD longer until the students are able to stop before they step over the edge, so we know they have enough warning of unexpected drop-offs and obstacles.

When I don't have the prototype AMD with adjustable sides to do these trials to determine the length of the AMD, I have used an AMD or a luggage carrier or portable shopping cart like the ones shown here, and temporarily attached exensions to make them longer until we find the length that is suitable for their AMD.

The bottom bar of the AMD shown to the right is extended to each side to increase detection of obstacles and to place the wheels far enough apart.

AMDs can be made from PCV pipe, customized for size, handle and wheel design as shown in the examples below.
Thanks to "An Illustrated Guide to Cane Repair and More" by Lynn Gautreaux for very helpful instructions to assemble the AMD! This book is available from AER -- order at AER's online bookstore or phone 877-492-2708 or 703-671-4500.

AMD for walking without pain 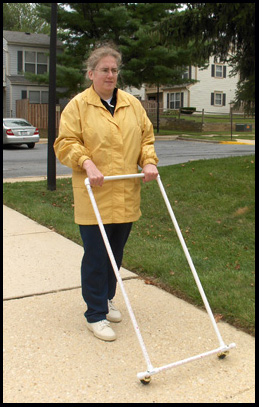 Using a cane correctly was awkward and sometimes painful for this woman, and she decided that an AMD would be useful. She wanted to be able to push it with a bar along the top (like pushing a shopping cart) rather than with handles at the side (like pushing a wheelbarrow). She may add pipe insulation along the handle to make it larger and softer, and pegs on the bottom so the AMD can stand on its own for storage.

The doors propped open in this building create hazards, particularly when someone trails the walls. When the cane is not consistently used correctly, it does not provide reliable protection and warn about the doors, as demonstrated here (click here for an explanation of the stages of learning to use a cane, and the importance of full mastery of the technique in order to provide protection). 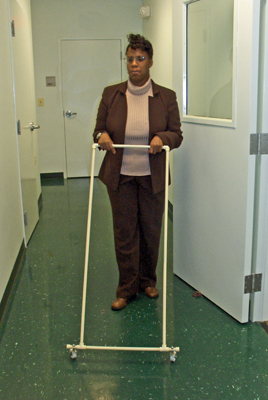 By contrast, the AMD provides full protection simply by being pushed ahead, without having to use proper cane technique.


AMD made by Eldre Boggs, COMS

A lightweight AMD is easy to maneuver with one hand while still providing full protection, leaving the other hand free to trail the walls looking for corners and doorways. 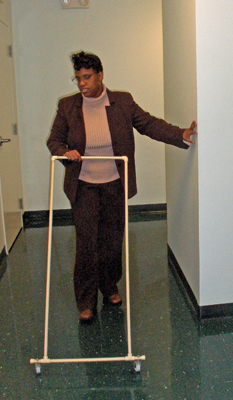 The photos to the right were taken soon after Ambutech began marketing a folding AMD. The two nearest photos show Kelly, who preferred Ambutech's AMD with the "indoor wheels." On the far right is a young man with his AMD, Ambutech's prototype with swivel wheels.
The photos below show Kelly in the Spring of 2016, about 6 years after the photos above were taken in front of her house. In those 6 years, she had been using her AMD daily, mostly indoors but occasionally using it outside, such as when taking out the trash. A lot of the white tape around the AMD was worn off but the AMD itself seemed as sturdy and rigid as the day she got it. 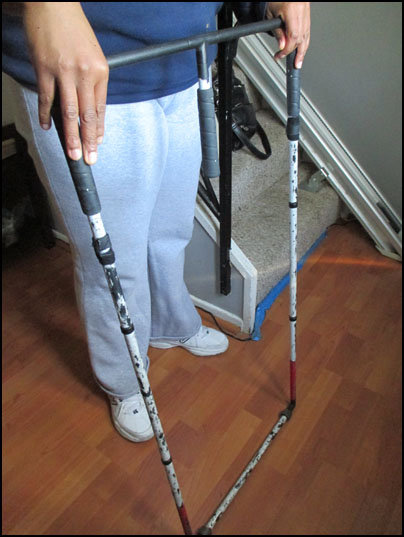 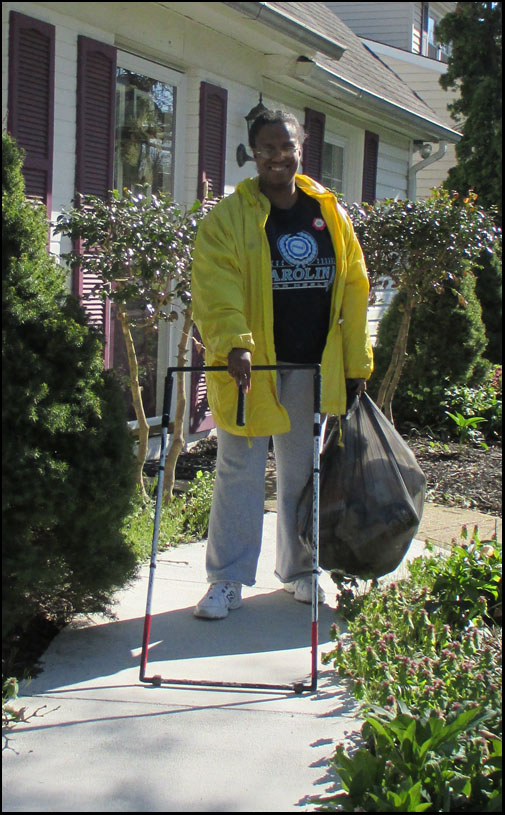 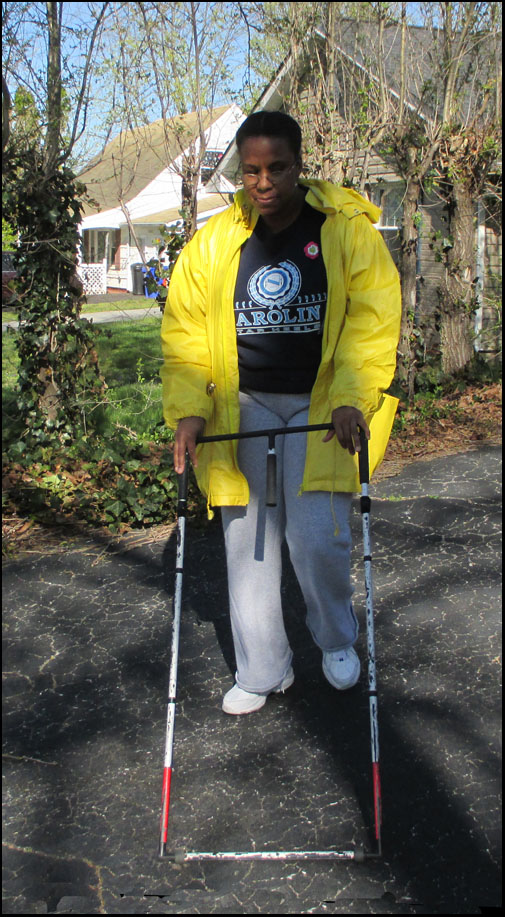 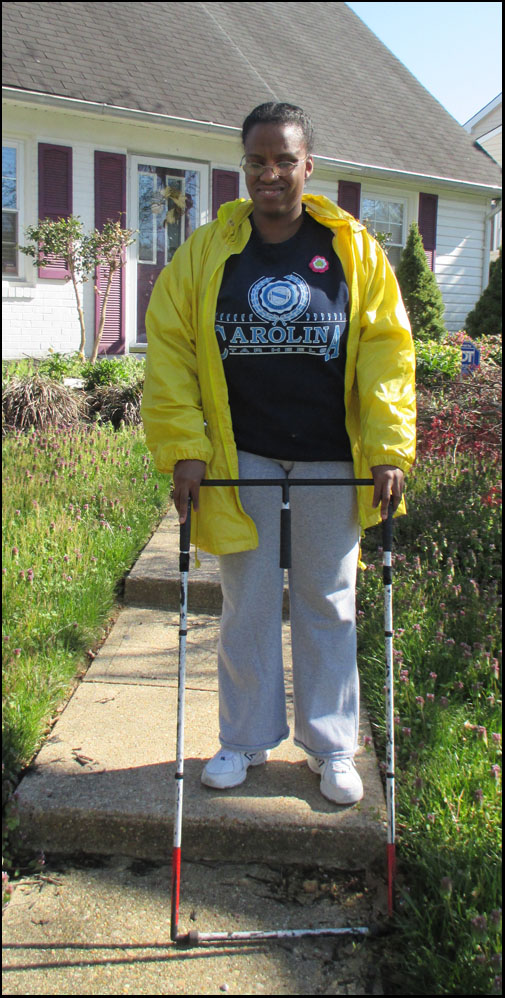 In the Winter 1995 newsletter of the Metropolitan Washington O&M Association, I published a series of photos of a young woman who had learned to use an AMD to walk around her block for exercise. I wrote:


"[Name] learned to maneuver her Alternative Mobility Device (AMD) deftly. In the first photo she has veered off the sidewalk but after searching with the AMD (second and third photos) she finds it again within seconds. Her AMD was developed by the Dept. of Veterans Affairs' Rehab R&D. They will provide free prototype AMDs to field test with elderly people; call Ricki Mancil [#]." 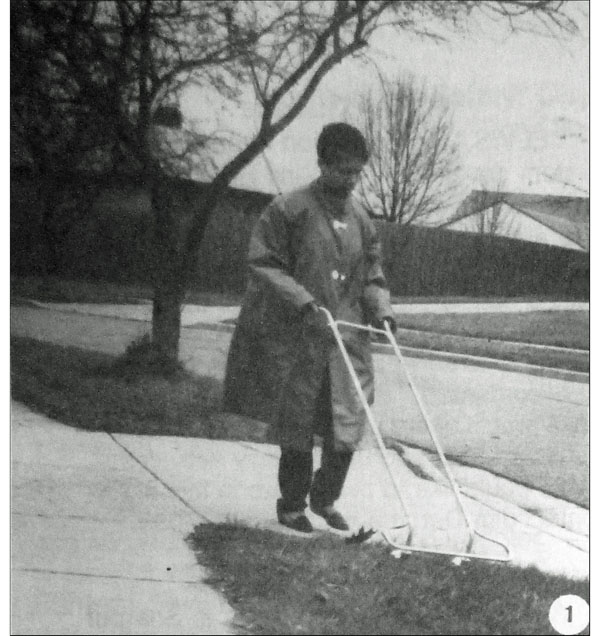 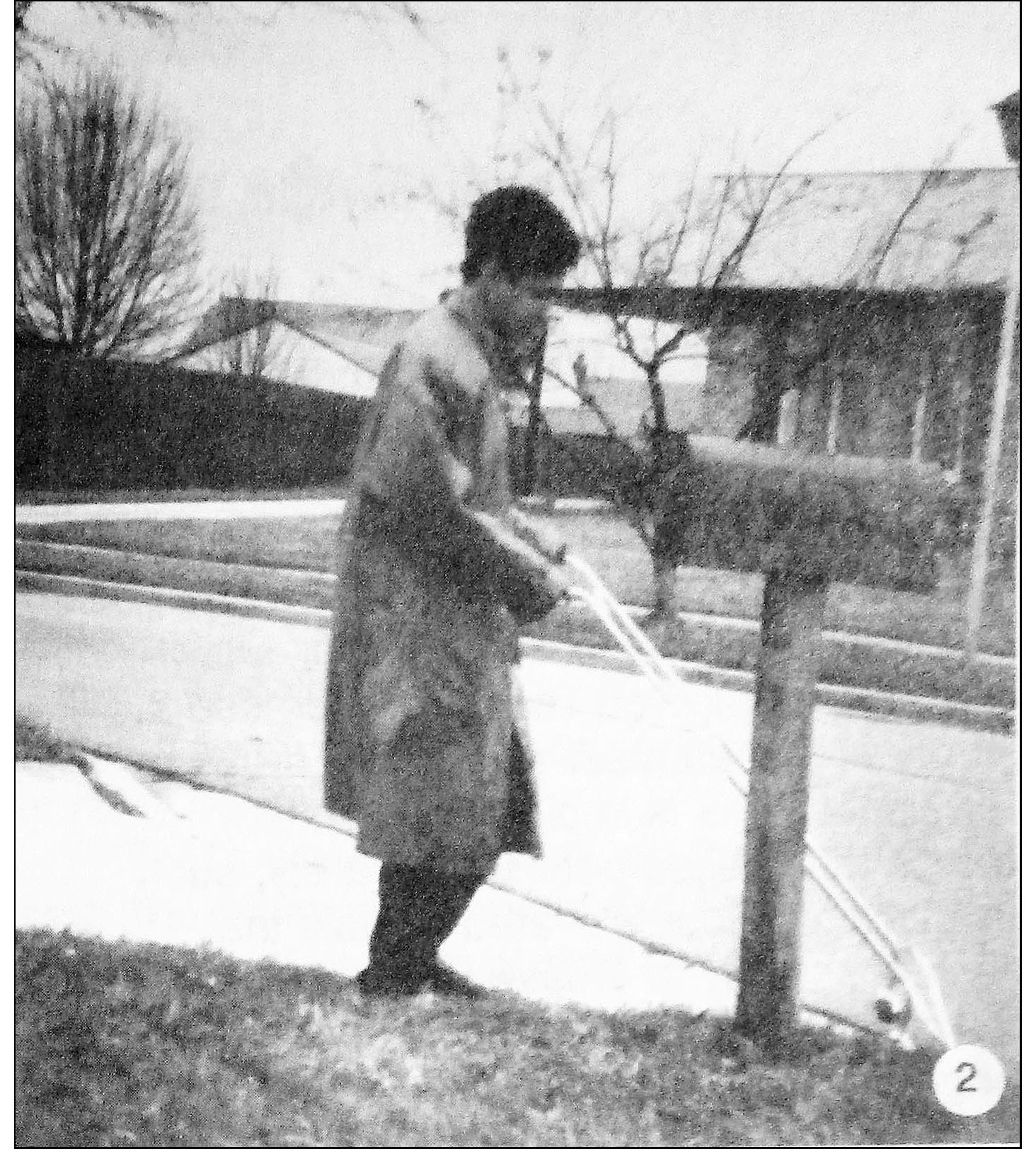 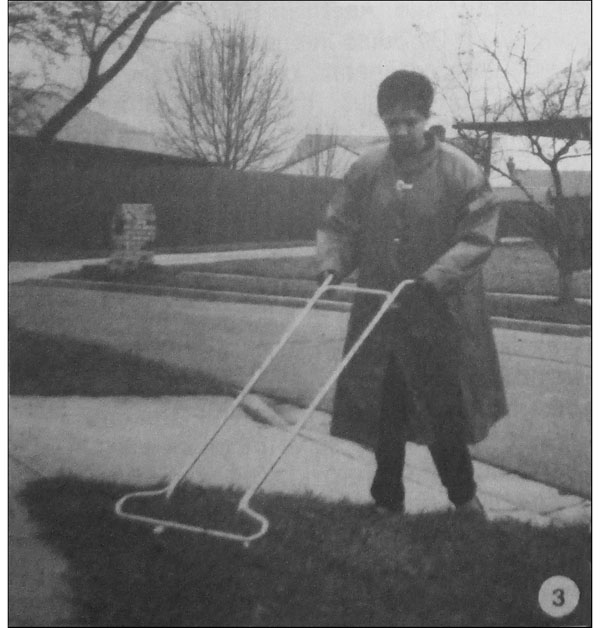 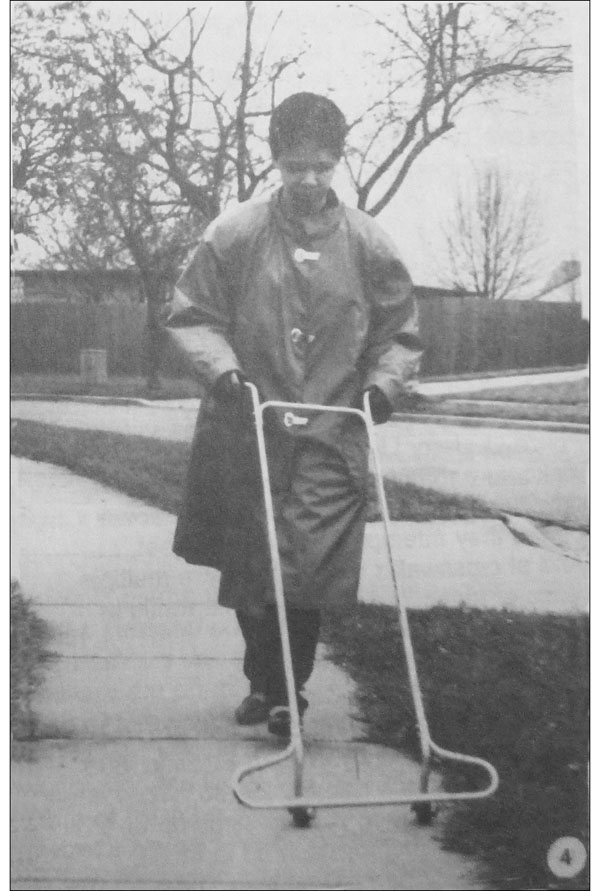